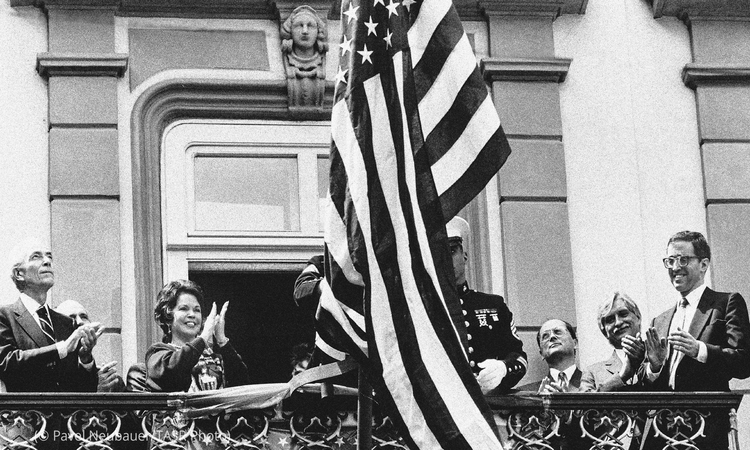 Today, on May 27th, we mark 30 years since the reopening of the U.S. Consulate in Bratislava. In the 30 years of its operation, the Consulate served more than half a million visa applicants in Slovakia, and has provided consular services to countless American citizens.

„Hundreds of thousands of Slovaks who have traveled to the United States for business, to study, to visit America’s vast array of National Parks, or to reunite with friends and family have passed through our Consulate. The United States and Slovakia share a historic friendship, strong ties, and common values. I know that this pandemic has had a terrible impact on our lives and travel, but as the situation improves, we look forward to facilitating travel to the United States when it is safe for everyone,“ said US Ambassador to Slovakia Bridget Brink.

“This year has been challenging for all of us. We hope that the pandemic situation continues to improve, and are ready to help facilitate travel for Slovaks as soon as it’s possible to do safely.  We continue to provide services to Americans in Slovakia. On this 30 year anniversary of consular services in Slovakia, my team looks forward to continuing to support the strong relationship between our two countries,” said Emily Teickenson, the US consul to Slovakia.

After World War II, on March 1, 1948, Vice Consul Claiborne Pell opened the Consulate General in Bratislava, just a few days after the February coup. As a result of the Communist Party coming to power, Pell remained in Bratislava for only six months, and the mission was forced to end on May 27, 1950. The building, which still houses the consular section to this day, has become a symbol of democracy and hope.

After the Velvet Revolution, the Consulate was symbolically reopened on May 27, 1991, after 41 years of closure due to communist oppression. The opening ceremony was attended by the Head of the Senate Foreign Affairs Council, Senator Clairborne Pell, U.S. Ambassador to Czechoslovakia Shirley Temple Black, Czechoslovak Minister of Foreign Affairs Jiri Dienstbier and Slovak Prime Minister Jan Carnogursky.

The consular section issues visas and provides consular assistance to citizens of the United States of America in Slovakia. It can, for example, issue travel documents and assist citizens in need.

If you have questions about visas or travel, visit www.sk.usembassy.gov or email consulbratislava@state.gov