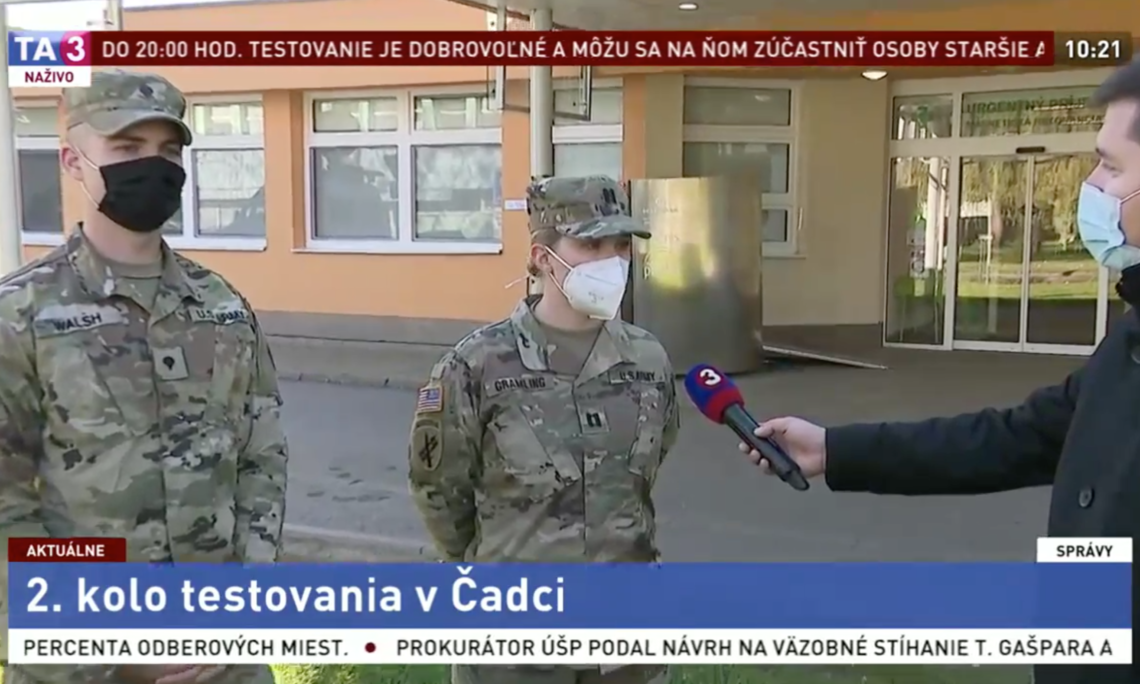 ČADCA, November 7th, 2020 — This weekend, the U.S. military volunteered alongside Slovak military and healthcare workers in Slovakia’s nationwide mass testing . It was part of a U.S.-Slovak civil-military cooperative initiative (CIMIC) which commenced on October 1st, 2020. The operation was conducted by the Armed Forces of the Slovak Republic, and saw U.S. Military officers volunteer their time with Slovak healthcare workers on the grounds of Kysucká Hospital in Čadca.

The towns of Čadca, Stará Ľubovňa and Púchov in northern Slovakia were the hardest hit areas in the country by the virus. Čadca is located in the Žiilina Region, which became the COVID-19 hotspot with an infection rate of 3.22% — the highest in the country. Following this mass testing and the implementation of stricter preventative measures, COVID-19 cases have dropped in the region. However, Čadca is still classified as a hotspot, ranking near the top of the list of the country’s ‘red’ districts.

In an interview on the grounds of the Kysucká Hospital testing site, Captain Madeline Gremling of the CIMIC unit,  there with her colleague Specialist (SPC) Sean Walsh, reflected on her positive experience as part of the initiative. “We haven’t seen a similar initiative in the US, as we’ve seen in Slovakia.  I am very glad I was able to see the testing. We were able to see a very streamlined process, very quick, very efficient, and [volunteering] has been a very positive experience for us.  Our deployment in Slovakia since October 1st has been excellent so far.”

The Wisconsin native continued, touching on the U.S.-Slovak civic military cooperation initiative experience, “What I like the most is that we can exchange experiences with one another.  Being able to observe the testing today has allowed us to learn how our counterparts are handling the problem.”

Together with the U.S. Military, the Armed Forces of the Slovak Republic have been collaborating for extended periods of time in the area of civil-military cooperation capabilities (CIMIC).  Since October 1, 2020, a crew of up to four American soldiers work in Martin,  in order to trainin and advise Slovaks in the field of Civil-Military Cooperation (CIMIC) and the Psychological Operations of Armed Forces Teams (PSYOP).  The Slovak and American civil military cooperation  is another example of support for shared values and the continued strong ties between the two countries, demonstrating the importance of strong leadership and partnerships when combatting the COVID-19 pandemic.

On the testing site of Kysucká Hospital, TA3 regional reporter, Peter Revús, interviewed Captain Madeline Gremling of the U.S. Military, who had the opportunity to observe the nationwide testing in Slovakia. Click here for the TA3 interview video [starting at 8:42m].

As Peter Revús highlighted, the interview with Captain Gremlin illustrates the international interest in  this small Central European country’s progress as they attempt this large-scale nationwide mass testing project.