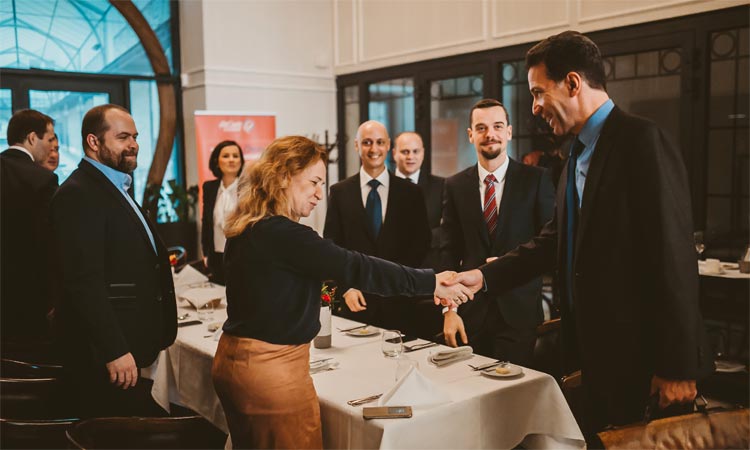 As Slovakia prepares to celebrate the twenty-fifth anniversary of its independence next year, it will also be celebrating twenty-five years of a close diplomatic relationship with the United States as a friend, partner, and ally. The ties that bind the United States of America and Slovakia are strong, encompassing cooperation in the fields of international security, defense, human rights and democracy, and of course a thriving economic and commercial relationship.

The basic statistics are impressive enough: the United States is Slovakia’s 16th largest trading partner overall and the 4th largest trading partner outside of the European Union, with trade between our two nations totaling approximately 2.22 billion dollars in 2016. American companies know that Slovakia is a great place to do business, bringing both investment dollars and good jobs—approximately 55,000 people in Slovakia work for American firms like U.S. Steel, Whirlpool, AT&T, Adient, Amazon, and others. Slovak entrepreneurs know that America is for a great business destination as well, with firms like Eset, Anasoft, and Colosseo having offices in the United States. As we mark twenty-five years of partnership, we have much to celebrate, and a firm foundation to build upon.

The impressive success that Slovakia has seen, resulting in remarkable economic growth and improved living standards for ordinary Slovaks, is due in no small part to the talent of its people and to the choices its leaders have made to pursue European and transatlantic integration, openness, a free market economy, and a democratic system of government. I am encouraged by the recent statements by Slovakia’s political leaders reaffirming their commitment to those values and policies. However, work remains to be done in order to sustain Slovakia’s success into the middle of the twenty-first century and to help all Slovak citizens share in that success. I believe that Slovakia is up to the challenge, and I believe that the United States has much to offer as a steadfast friend and partner.

A well-educated and adaptable workforce will remain a key to continued economic growth. This requirement will be especially important as Slovakia seeks to build a more diverse economy that moves up the value chain from manufacturing to more knowledge-based enterprises. The next generation of Slovak workers will not only need the technical and language skills expected in today’s global market, but will also need to develop the critical thinking skills that so many of tomorrow’s jobs will require. This will require investment and commitment to education from primary school through university and beyond, with special efforts to give all Slovak citizens access to education and support throughout their lifetimes.

As a world leader in higher education, the United States is in a particularly strong position to help Slovakia meet its educational goals. We are already doing so by supporting academic exchange programs through our Fulbright program, expanding English language education through our English Teaching Assistants, and investing in the Pontis Foundation’s Generation 3.0 education reform initiative. And each year, nearly 3,000 young Slovaks have the unique opportunity to gain valuable hands-on international employment experience through our popular Summer Work and Travel exchange program. They return home with a truly global perspective, vastly improved English language skills, and valuable employment experience that sets them apart to future employers. As Ambassador, I place a priority on expanding our educational ties through formal cooperation between American and Slovak institutions and experts, and through student exchange programs such as the Summer Work and Travel program.

In addition to providing tomorrow’s workers with the skills they need to compete in an integrated global market, Slovakia should offer attractive opportunities to its next generation of workers. These opportunities depend on innovation and entrepreneurship, and here again the United States’ leading position makes us an ideal partner for Slovakia’s innovators, entrepreneurs, and big-thinkers. American firms are world-leaders in innovation, with globally renowned innovators such as Amazon, Hewlett-Packard Enterprise, and IBM finding space to do business in Slovakia. Meanwhile, some of Slovakia’s most talented and driven young people have found success in the United States at innovation leaders such as Google, Apple, and Amazon. In addition to these strong existing business ties, one of my goals as Ambassador is to find ways to connect the many talented, successful Slovak-Americans with forward-thinking partners here in Slovakia and watch what they can accomplish together. Here in Slovakia, we are already partnering with local innovators and educators to make careers in information technology open to everyone through our support of groups like AjTyvIT, a local organization that offers support to young women aiming for a career in computing and information technology. We will continue to identify local partners who are dedicated to building and expanding a culture of innovation and entrepreneurship and support them in their efforts.

I’m proud to represent the United States of America in Slovakia, and I am proud that our countries have supported each other since the very beginning. We have inherited a priceless legacy from the people who came before us—from the Slovak patriots who worked in the United States to create an independent Czechoslovakia at Pittsburgh in 1918, to the heroic Slovak participants in the Slovak National Uprising and the American bomber crews and special forces that supported them, to the courageous men and women who partnered to create a free, democratic, and open independent Slovakia since independence in 1993. Our task now is to continue to build upon their impressive legacy of achievement to ensure that the next generation of Slovaks and Americans enjoy a prosperous, secure future together.