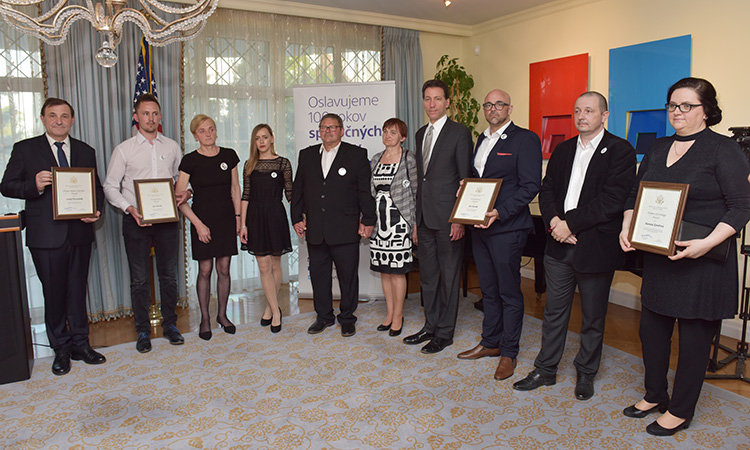 Investigative journalist Jan Kuciak, formerly of aktuality.sk, received the Transparency Award posthumously for his investigative reporting into corruption, his courage to pursue the truth and his sacrifice in service of his fellow citizens.

The Ambassador presented the award to family members and colleagues at aktuality.sk, who received it on Mr. Kuciak’s behalf. In honor of Mr. Kuciak’s courage and legacy, the Embassy’s transparency award will be renamed the “Jan Kuciak Memorial Transparency Award” in future years.

Evangelical theologian Ondrej Prostrednik received the Embassy’s Human Rights Award for his outspoken defense of vulnerable minority communities in Slovakia.  Prostrednik has advocated tirelessly for equal treatment of LGBT citizens as well as for religious tolerance and interfaith understanding between Christians, Jews, and Muslims.

Mariana Kováčová, founder and director of Centrum Slniečko in Nitra, received the Woman of Courage Award.  Centrum Slniečko has provided supportive and protective services to victims of domestic violence and sexual abuse since the early 1990s.  Ms. Kováčová has been a vocal advocate for women’s rights and for improving the provision of social and protective services in Slovakia.

The U.S. Embassy’s annual human rights awards ceremony honors the outstanding accomplishments of Slovaks working to improve the lives of their fellow citizens and the health of Slovakia’s democracy and demonstrates the United States’ ongoing commitment to the fundamental values of equality, tolerance, good governance, and transparency.