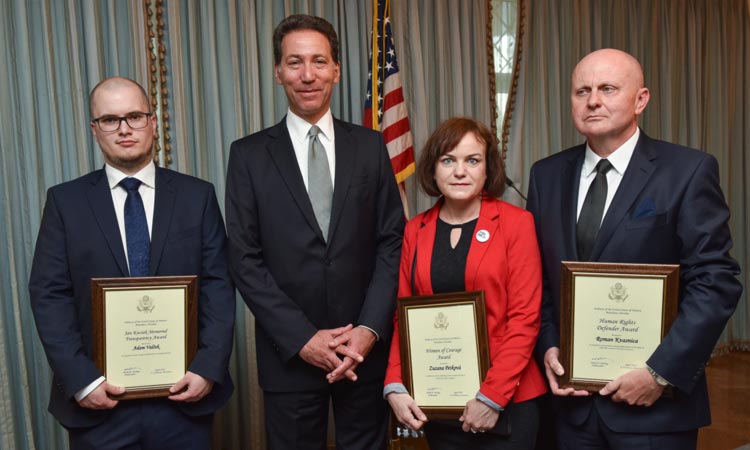 Attorney Roman Kvasnica received the Embassy’s Human Rights Defender Award for his continued commitment and outspoken defense of people and organizations whose basic rights and freedoms have been violated or neglected by state authorities. He currently represents six victims of the controversial 2013 Moldava nad Bodvou police raid who face perjury charges after they reported incidents of police brutality and abuse of power to Slovak authorities. Mr. Kvasnica also represents Zlatica Kušnirova, the mother of Martina Kušnirova, and for more than 12 years defended Hedviga Malinová-Žáková, who faced years of criminal prosecution on perjury charges that were dropped in 2018 by Hungarian prosecutors. Roman Kvasnica represented all of the above-mentioned persons pro bono.

Former investigative journalist, activist and director of the Let’s Stop Corruption Foundation Zuzana Petková received the Embassy’s Woman of Courage Award for her unflinching resolve to inform the Slovak public about corruption and take steps to combat it. She is one of the leading figures of Slovak investigative journalism and now, as the director of the Let’s Stop Corruption Foundation, has brought a results-oriented approach to supporting whistleblowers, drafting achievable reforms through dialogue with the government, and raising public awareness of the impact of corruption.

Investigative journalist Adam Valček, who is currently working for the SME daily newspaper, received the Jan Kuciak Memorial Transparency Award for his courage and commitment to uncover the truth. In his investigative reports, Adam Valček uncovered suspicious business transactions, fraud and corruption. Adam Valček has faced persecution and intimidation because of his articles.

The U.S. Embassy’s annual human rights awards ceremony honors the outstanding accomplishments of Slovaks working to improve the lives of their fellow citizens and the health of Slovakia’s democracy. The awards also demonstrate the United States’ ongoing commitment to the fundamental shared values of equality, tolerance, good governance, and transparency.