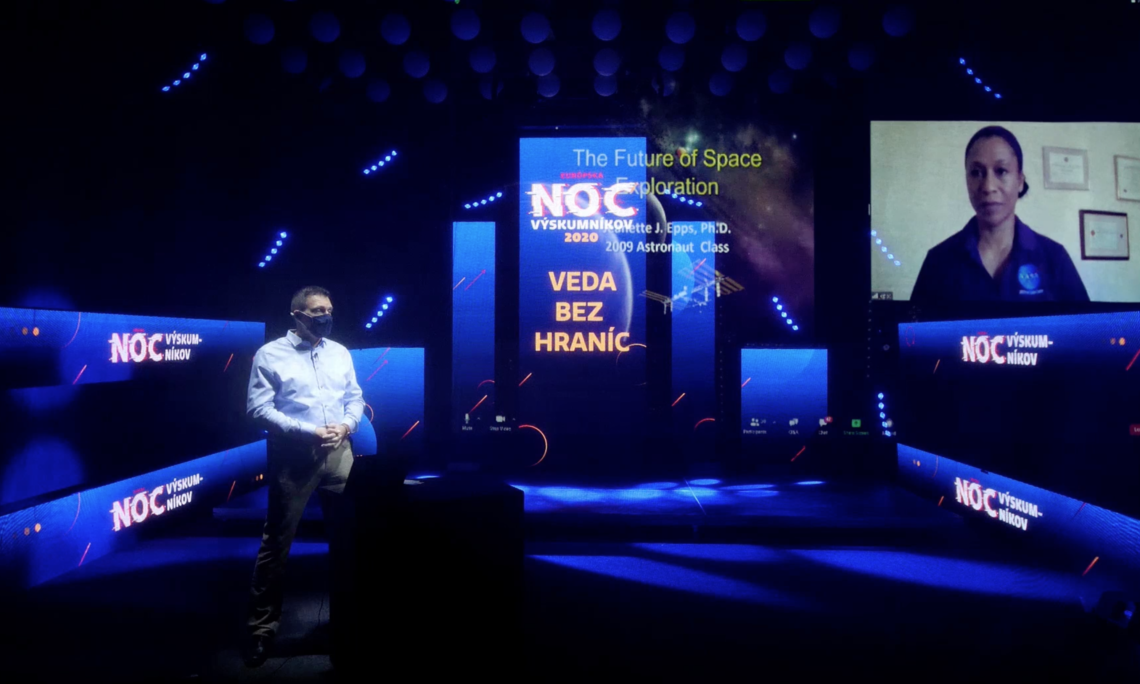 U.S. Embassy Brings NASA Astronaut Jeanette Epps to European Night of Research 2020  December 1, 2020 – Last year, 18,353 people applied to NASA to become an astronaut and only 11 made the cut.  Currently there are just 48 men and women working as fully trained astronauts.  One of those women,  Jeanette J. Epps, spoke to the audience through a pre-recorded interactive event for the virtual European Night of Research on Friday, November 27.  Despite preparing for her trip to the International Space Station (ISS) this year, and before potentially becoming the first woman on the moon, Ms. Epps spoke to Slovak teachers, researchers, students, and press.  At the special event she discussed her experience as an astronaut, highlighted the value of STEM-based education, and shared her perspective on the future of space exploration.

On August 25, 2020, NASA announced that Epps would join the first operational Boeing Crew Mission tothe ISS.  With that  six month mission on the Boeing Starliner spacecraft (scheduled for 2021) she will become the first black woman to serve on the ISS crew.

In the TEDx Talk-style “Night of Researchers Science Without Borders” event, Ms. Epps gave an inspirational presentation — taking participants on a trip through her accomplished career, and recalled various analog training missions (missions on earth) designed to prepare astronauts for their missions into space. From ‘NEEMO’ to ‘CAVES’, Epps talked about how they prepared the team for the rigors of working on the ISS.  Astronaut training is extensive and demanding, and Epps answered questions on a range of topics from her formal education and background to the survival training missions that prepare her to go into space.    She also underlined the importance of building interpersonal relationships during her trainings and emphasized of the value of strong team building exercises and training to  cooperate with fellow colleagues as the key to  her crew’s success.

“Mainly we learned how to live together and to be adaptable and flexible. So students if you end up in a similar situation, you can be the most intelligent person in the world but if you do not know how to cooperate with people, you won’t get very far. “ Epps said.

Epps also touched on the future of space exploration. Since the end of NASA space shuttle missions in 2011, Epps explained how the new privatization of space travel by SpaceX and Boeing has positively shifted NASA’s resources to other, more expansive projects in space. A great example of this are the new Artemis missions to the moon which will begin in 2024. Epps emphasized that going back to the moon will not be an American mission, but the return will be as an international team and initiative.

“About the Artemis program, it is important to emphasize that that we are not returning as the United States, we are all going back together with our international partners. So it won’t be the USA that will be going back to the moon, it will be ‘planet earth’ going back.” According to Epps.

Epps concluded her presentation accentuating the fact that no one should be dissuaded when it comes to working to achievetheir dreams,

“To conclude I want to tell students to never stop dreaming because you never know where these dreams will lead… Follow your dreams! They can take you to unexpected, wonderful places.”

To watch the Night of Research video, click here!