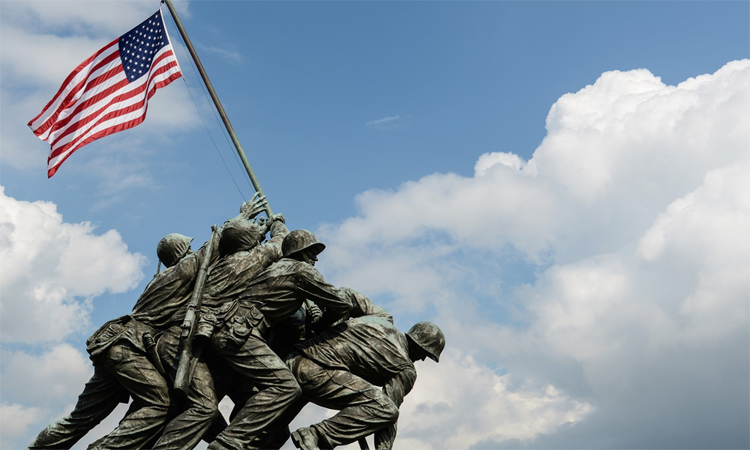 It is one of the most iconic images of the Second World War. Six United States Marines, in the midst of heavy fighting on the small island of Iwo Jima, struggle to raise the American flag above Mt. Suribachi. Among the six men captured in the iconic photograph, and later permanently memorialized in bronze for the U.S. Marine Corps’ war memorial just outside Washington DC, was their platoon leader, Michal Strank, a Slovak immigrant from Jarabina. This February we mark the seventy-third anniversary of the Iwo Jima flag raising and Michal Strank’s courage with a series of film screenings in Bratislava, Nitra, and Banska Bystrica that celebrate the life and sacrifice of this Slovak-American hero.

This February also marks seventy years since the February 21-25, 1948 coup that saw Czechoslovakia’s democratically elected government fall into the hands of the Soviet-backed Communist Party. The United States had established its consulate in Bratislava shortly after the end of the Second World War, with Claiborne Pell serving as the Consul General in the historic building on Hviezdoslavovo Namestie. The consulate remained open even after the 1948 coup until the Communist government ordered it closed on May 27, 1950. Despite the closure, the U.S. government refused to sell the building, confident that we would need it in a post-Communist future. The consulate building thus became “the Beacon of Democracy” throughout the Communist era and until it reopened as a consulate in 1991. In 1993, it became the U.S. Embassy to the Slovak Republic as our two nations began to write a new chapter in our long story of cooperation and friendship.

These two anniversaries are a fundamental part of the United States’ and Slovakia’s long history as friends, partners and allies. Michal Strank epitomizes the human ties and personal history that bind our two nations. These ties predate even the creation of Czechoslovakia, as Slovak and Czech immigrant communities in the United States led the way in advocating for a free and democratic Czechoslovakia in the early twentieth century. Today, countless Slovaks and Americans continue to cultivate and renew these strong bonds of friendship through cooperation in the business, technological, cultural, and educational spheres.

Our historic embassy building is also a powerful symbol of our relationship and the expansive cooperation between our two governments. The United States was one of the first governments to recognize the newly formed Slovak Republic in 1993. Since then, our relationship as allies and partners has only deepened with Slovakia’s accession to NATO and its continued integration into the trans-Atlantic community of democracies through the European Union and other Western institutions.

Throughout this year of significant anniversaries, we will continue to celebrate the life of Michal Strank and the many others whose contributions to the United States and Slovakia serve as the foundation for our relationship. We will also remember the hard work of generations of diplomats, soldiers, and civil servants who have carefully built the successful partnership between our two governments. It is up to us to continue to demonstrate the courage to be free, and to write the next chapter in the history of our enduring relationship.