Home Domov | News & Events | The Courage to Fight for Democracy 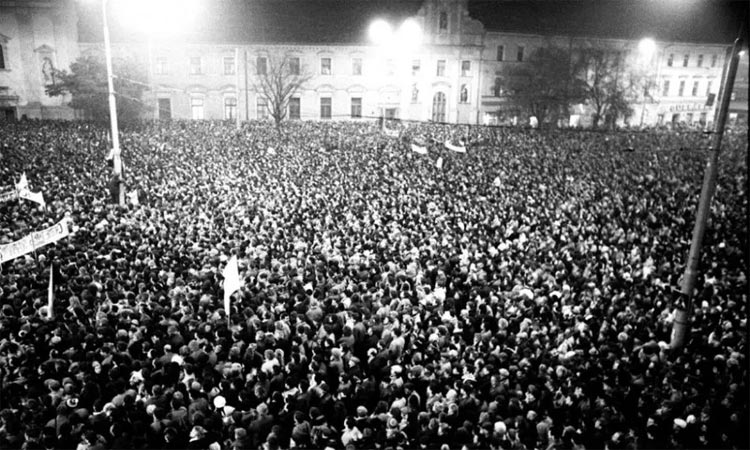 As Slovakia marks the Day of Struggle for Freedom and Democracy on November 17, we should pause to consider the ongoing relevance of the protests of 1989 and the Velvet Revolution. Ordinary Slovak and Czech students, later joined by their fellow citizens, courageously took to the streets to protest Soviet-backed authoritarianism and call for democracy and sovereignty. It was the student protests of 1989 and the subsequent revolution that paved the way for democratic reforms and for Slovakia’s return to the Western community of democracies, ushering in an era of unprecedented peace, stability, prosperity, and sovereignty for the Slovak people.

While celebrating the courage of the protesters, particularly the success of the Velvet Revolution, we must also remember that the struggle for freedom and democracy did not end with the collapse of Communism, with the establishment of an independent Slovakia, or even with Slovakia’s successful integration into the European Union and NATO. Citizens of free, democratic states must carefully safeguard, constantly renew, and continually perfect their societies. No democracy, however advanced or established, has unlocked its full potential. This is as true in the United States as it is in Slovakia. Democracy cannot fully deliver on its promises until all citizens are fully protected, integrated participants. In addition, we must constantly guard against malicious actors who seek to replace democracy and freedom with discredited, harmful ideologies. The historical record is clear—democracy, freedom, inclusion, and sovereignty lead to peace, prosperity, and stability. Authoritarianism, repression, and exclusion lead to poverty and conflict. And most fundamentally, the priority that democratic societies place on individual freedom and dignity creates the conditions for all of us, individually and collectively, to reach our fullest potential. Authoritarian societies squander the possibilities of human achievement, of lives lived to their fullest.

In addition to improving and safeguarding our democratic freedoms at home, we must also stand with our neighbors and their similar aspirations. All this year as we celebrate one hundred years of the first Czechoslovak Republic and twenty-five years of Slovak independence, we have been telling the stories of how the American and Slovak people worked together to build democracy in the heart of Central Europe. That story extends even beyond our partnership to the other steadfast transatlantic Allies and partners that supported you on your journey to prosperity, independence, and freedom. Today, Slovakia stands firm with the democratic community in its support for the people of Ukraine, the Western Balkans, and beyond in their ongoing efforts to build stable, sovereign democratic homelands free from foreign domination. I salute those efforts and am confident that they will continue and ultimately meet with success.

The struggle for freedom and democracy in Slovakia is the story of ordinary people and their courage to be free. While honoring their legacy, we should also recommit to defend their hard-won victories; work to build more inclusive, democratic societies at home; and extend our support to their ideological heirs who continue to fight for their own free, democratic homelands.