Home Domov | News & Events | The Courage to Be Free Lives On: Memories from a Tour of Slovakia 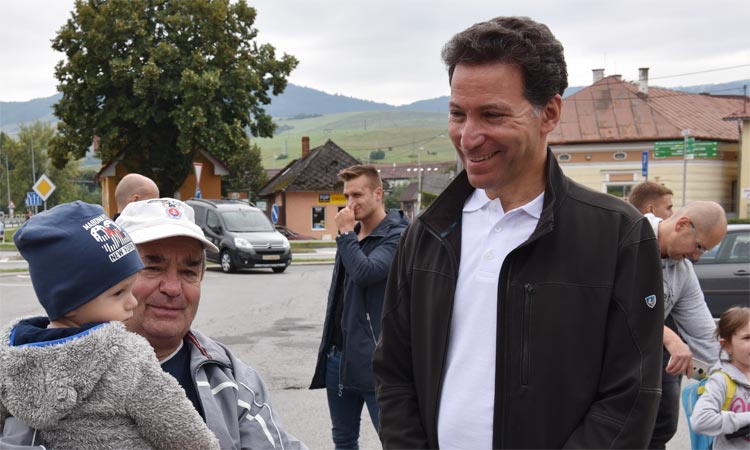 On May 31, 1918, approximately two dozen Slovak and Czech patriots gathered at the Loyal Order of Moose building in downtown Pittsburgh, Pennsylvania to sign the Pittsburgh Agreement, also called the “birth certificate” of the first Czechoslovak Republic. From that beginning, the people of the United States and the people of Slovakia have shared history, relationships, and the courage to be free.

This summer, our Embassy took to the highway to tell our shared stories –and create new ones– on a seventeen-day, twenty-six city “America on Wheels” caravan trip. Along the way, we talked to thousands of ordinary Slovak citizens to hear their thoughts about the United States, about freedom, and their hopes and aspirations. What we saw and learned leaves me deeply encouraged for the future of Slovakia, and the future of our two nations’ friendship.

We will always remember the kindness and beauty we experienced on our tour through the heart of Slovakia. In Ziar nad Hronom, we feasted on sweets and pastries prepared in a local woman’s kitchen. In Stara Lubovna, we played catch with a young boy, giving him his first taste of American football. In Bytca, we spent several relaxing hours paddling around a crystal-clear hill country lake, and outside of Myjava we pitched tents, camped overnight, and awoke to a beautiful Slovak sunrise. And all along the route, we learned that the personal connections that sustain the ties between our two nations are stronger than we ever could have imagined.

At our first stop in Brezova pod Bradlom, we met local historians who are preserving the stories of downed U.S. World War II pilots and the courageous Slovak citizens who offered them aid and shelter. At our last stop in Stara Lubovna, we joined a tribute to Jan Kubasek, a local hero and signer of the Pittsburgh Agreement. Everywhere in-between, we heard stories of Slovak-American family members; fondly recalled vacations to the United States; productive years spent studying in American schools or working in American business; and memories of American Peace Corps volunteers who left deep impressions on the communities they served.

We also saw, first hand, that ordinary Slovak citizens continue to cherish their hard-won freedom and sovereignty. Democratic societies depend on ordinary citizens to defend and exercise their freedoms, and a shared commitment to those freedoms serves as a pillar of the Transatlantic community of democracies. At a few points along our journey, we met vocal individuals who exercised their freedom of speech to question our shared relationship and attack the fundamental values of democracy. However, we also found far more courageous Slovaks—mayors, soldiers, students, scholars, teachers, and others from all walks of life—who stepped forward to publically defend our shared values and our enduring partnership.

Our shared “courage to be free” has bound our two nations for the past century. Based on what we saw and heard from ordinary Slovak citizens across the country, it is clear that this courage and commitment to freedom lives on. I am confident these values will continue to drive Slovakia’s success as a prosperous, sovereign, democratic nation, just as they will sustain our longstanding friendship through the next one hundred years and beyond.