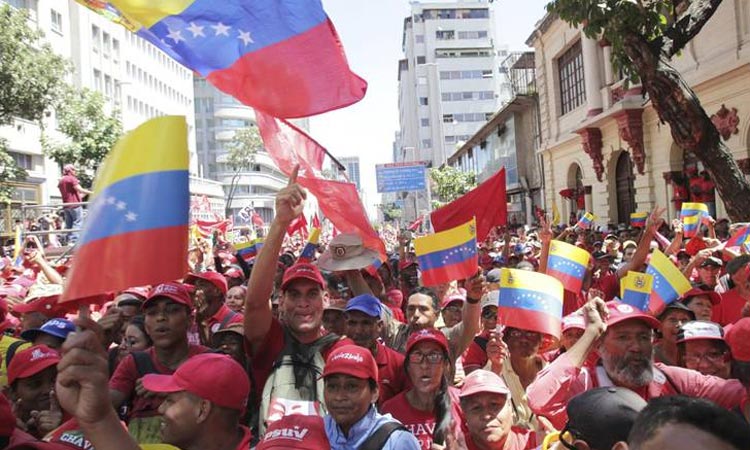 Standing with the Venezuelan People in their Fight for Democracy

As the humanitarian crisis created by Nicolas Maduro, the illegitimate self-proclaimed president of Venezuela, deepens, the de facto Maduro regime and its supporters have accused the United States of attempting a coup and targeting Venezuela’s oil reserves. This is a cynical lie told by a failing regime to maintain its repressive control over the Venezuelan people. The effort to restore democracy in Venezuela has been, and continues to be, an international initiative led by Venezuela’s South American neighbors, supported by most EU members, and justified under Venezuela’s own constitution. The United States is proud to support these efforts and the aspirations of the Venezuelan people in their demand for freedom and competent governance.

In 2017, the Lima Group— consisting of fourteen South, Central, and North American nations not including the United States—formed to support the restoration of democracy in Venezuela as its once prosperous economy collapsed and dissatisfaction with the Maduro regime spread. In 2018, the same group, along with the EU, Slovakia, and many other democratic nations, condemned unconstitutional, undemocratic sham elections and refused to recognize Maduro in his bid to illegitimately consolidate power. Now, all South American countries save Bolivia, Suriname, Paraguay, and Guyana have recognized the transition of Juan Guaido from leader of the democratically elected National Assembly to interim President under articles 233,333, and 350 of the the Venezuelan constitution. Most other democratic nations have followed the Lima group’s lead, including all but four European Union member states. Maduro, by contrast, receives his most vocal support from countries such as Cuba, Russia, China, and Iran—nations that also repress their own citizens and support antidemocratic models of government around the world.

In addition to our support for democratic forces in Venezuela, the United States also stands ready to supply the Venezuelan people with badly needed food aid and other necessities. We cannot ignore their plight. Currently, approximately sixty percent of Venezuelan hospitals have closed, over three million people have fled the country as migrants, and the vast majority of Venezuelans say they would like to join those that have already left. We have worked with regional partners to pre-position lifesaving food, medical supplies, hygiene kits, and other badly needed items on the Venezuelan border, ready for delivery to those in need. We have also announced fifty-six million dollars in aid for Venezuelan migrants that have fled to neighboring countries. We have seen how the Maduro regime has responded to international efforts to aid the suffering Venezuelan people—by blocking deliveries and firing on people trying to access this aid, killing some and wounding scores more.

Over two decades of misrule, Maduro and his predecessor Hugo Chavez have wrecked an economy that was once the envy of South America and sparked mass migration larger than the recent exodus from Syria during the Civil War. They have forced the Venezuelan people to suffer under a system similar to the one that tormented the nations of Central Europe behind the Iron Curtain, with similar disastrous results.

Just like the nations of Central Europe had the courage to strive for freedom in 1989, the people of Venezuela are raising their voices and calling for freedom and an end to authoritarian misrule. They have made their choice, and now the nations of the free world must choose. Will they stand on the side of a failing, repressive, unelected regime? Will they stand with authoritarians and dictators? Or will they stand with the suffering people of Venezuela as they seek to build a freer, brighter future for themselves and their children?