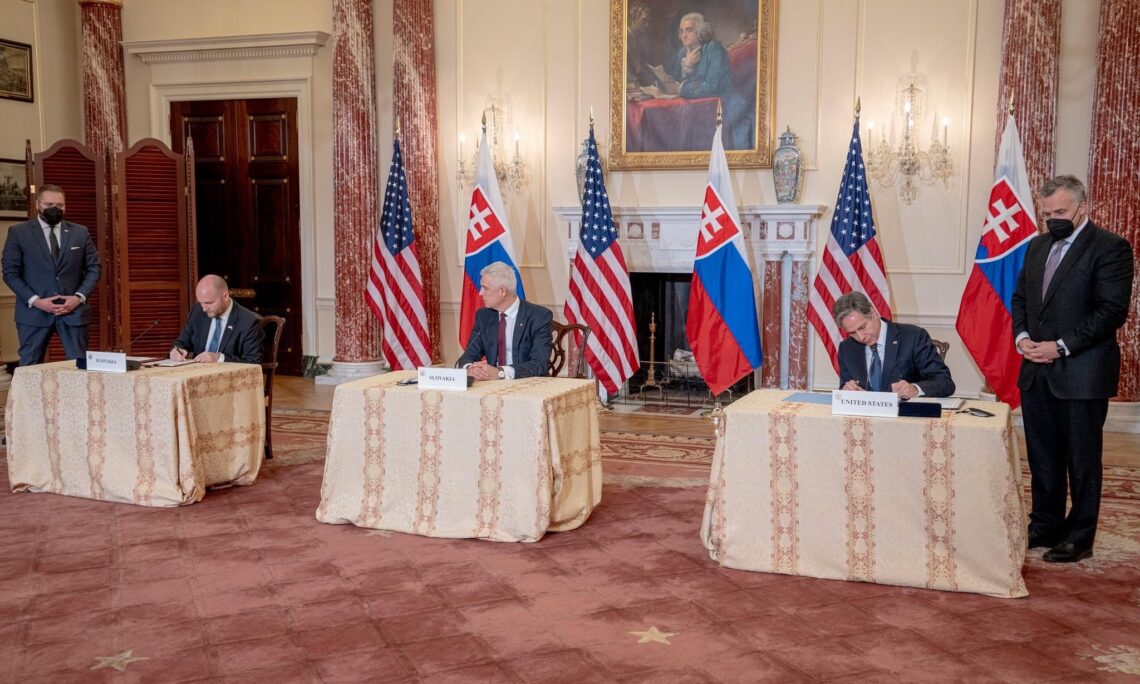 SECRETARY BLINKEN:  Good evening, everyone.  Foreign Minister Korčok, Defense Minister Nad’ – Ivan, Jaroslav – welcome.  I am so pleased to have you here at the State Department today in Washington.  We just had very good consultations on the many issues that bring us together.

But I just want to say at the outset how grateful the United States is for the friendship and strategic partnership that we have with Slovakia, in addition to our people-to-people ties, with nearly 1 million people of Slovak descent living in the United States, and our economic ties with billions of dollars in trade and investment between our two countries every year.  The strength of this relationship is also evident in our defense ties and security cooperation, and that’s what we are here to focus on in this moment.

We’ve been partners on security since 1993, the year that the independent Slovak Republic came into existence.  And in 2004, we became NATO Allies, which took our defense cooperation to a new level.

Today we take another step by signing a Defense Cooperation Agreement.  This agreement makes it easier for our militaries to coordinate on common defensive efforts, like conducting joint training exercises.  It will create more regular consultation between our countries on threats to our people, to international peace and security.

And as Slovakia seeks to upgrade its defense capabilities and infrastructure, the agreement paves the way for the United States to support those efforts.  We’ve signed similar agreements with many of our NATO Allies because we believe that closer defense cooperation is in our interests, our Allies’ interests, and in the interests of security and stability throughout Europe.

Now, we’re seeing a lot of disinformation aimed at undermining this agreement and, more broadly, the benefits of transatlantic partnership.  So let me be clear about a few of the principles behind what we’re doing today.

This agreement is based on cooperation and respect, the same values that form the basis of our cooperation through NATO.  It was written by Slovakia and the United States together as full, equal, and sovereign partners, and it represents – in the interests of both of our governments – the interests of the people of both of our countries.  Nothing in today’s agreement creates permanent U.S. bases or troop presence in Slovakia, and the agreement fully respects Slovakia’s sovereignty and laws.  We may be signing it here today, but its final approval will be decided by the democratically elected Slovak parliament and ratified by its president.

Over nearly 30 years of diplomatic relations, Slovakia and the United States have worked together as partners, as friends, as allies, and our work has made both our countries and the transatlantic region as a whole stronger, safer, more prosperous.  Today’s agreement builds on that past and it will help us create together an even stronger future.

So simply thank you to our friends, to our partners for making this happen, for being here today.  And now, Ivan, over to you.

FOREIGN MINISTER KORČOK:  Mr. Secretary of State, dear Tony, many thanks on my behalf and on behalf of the minister of defense for receiving us today in Washington, D.C., and thank you for a very useful exchange on our bilateral relations, but mainly about the developments in Europe and in the east.

I wish to start by echoing what you have just said about our relationship.  Our partnership is strong from the first day of our independence.  We stood together as friends.  We became partners, and since 2004 we are NATO Allies – Allies that not only share values, but also stand shoulder to shoulder when these values and principles are being challenged.

U.S. presence in Europe is vital for both sides of the Atlantic.  It contributes to strengthening the security and stability of Europe and the Alliance.  In Central Europe, we have learned the hard way what does it mean if the U.S. is not present or not engaged actively.  By active engagement, I also mean people-to-people contact, scientific, economic, political, and security and defense cooperation at every level and every opportunity.  Developments in past weeks only underscore how important are open and frank consultations among Allies and partners and the strong transatlantic unity.  The security of Europe is at stake as we speak.  As NATO Allies, we are ready to engage in genuine dialogue with Russia to seek constructive outcomes, but there is no space to compromise on our core principles.

My fellow Minister of Defense Jaroslav Nad’, you are about to sign an agreement that moves our defense partnership to the 21st century.  This agreement is important for our countries and our NATO commitments.  It gives to Slovakia and to the United States tools to further deepen our military cooperation and to make sure that we – when we act together we know why and how and under agreed conditions.

Finally, let me, Tony, say thank you to you, to your friendship.  We will continue in our conversations on deliverables for the Summit for Democracy, greening our industries, making our supply chains more resilient, or modernizing our defense.  As we are gearing up for the 30th anniversary of our bilateral relations in 2023, I hope to welcome you in Bratislava on this occasion.

DEFENSE MINISTER NAD’:  Dear Secretary Blinken, dear Tony; dear Minister Korčok, dear Ivan:  This day is a special and important milestone in our bilateral relations and in defense cooperation between the United States and Slovakia.  The Defense Cooperation Agreement clearly demonstrates the intensity of our close partnership in defense and in security.  It is also an expression of our shared commitment to transatlantic security as NATO Allies.

Today we are putting our cooperation on an appropriate legal footing.  We are ready to work closely on delivering on the defense cooperation initiatives that are ongoing and look together for new opportunities to develop this strategic partnership.

Dear Tony, let me reiterate that the United States is a strategic ally for Slovakia.  This strong bond is built not only on the historic role the U.S. has played in the creation of an independent Czechoslovakia and historic role the U.S. has played in Slovakia’s entry into NATO, but also in the modernization of our armed forces.  This agreement is another step in our long-term objective of bringing this invaluable relationship to a higher level.

We have to take the current threats and challenges in the security environment seriously in order to protect foundations of our lasting security and shared values of democracy, freedom, and prosperity.  Yes, we are close partners, we are close friends, and we are close allies.  Thank you, Tony.

SECRETARY BLINKEN:  Thank you both very much.  Can I just say I just want to add one thing?  On a personal level, I just want to express my admiration and appreciation for the leadership of these two colleagues.  Thank you.

You can watch the signing ceremony here – https://www.youtube.com/watch?v=n5WtK8dDkko