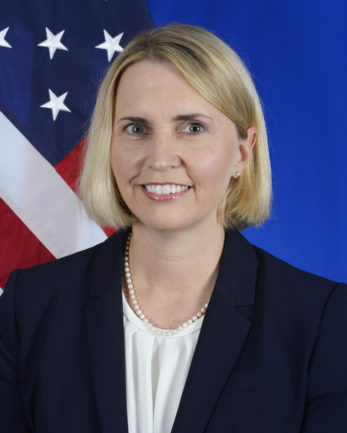 Ambassador Brink arrived in the Slovak Republic on August 15, 2019.

A career member of the Senior Foreign Service, Ambassador Brink was sworn in as Ambassador to the Slovak Republic on July 1, 2019.  She most recently served as Deputy Assistant Secretary in the Bureau of European and Eurasian Affairs at the Department of State (2015-2018), with responsibility for issues related to Eastern Europe, the Caucasus, and the protracted conflicts in Europe.  She also served as Deputy Chief of Mission at the U.S. Embassies in Tashkent, Uzbekistan (2014-2015) and in Tbilisi, Georgia (2011-2014).

During her more than twenty years in the Foreign Service, Ambassador Brink has spent most of her career focused on advancing U.S. policy in Europe and Eurasia.  She was the Director for the Aegean and the South Caucasus at the National Security Council (2009-2010) and served in the State Department as the Deputy Director for Southern European Affairs (2008-2009), Special Assistant to the Under Secretary for Political Affairs (2002-2004) and Cyprus Desk Officer (1999-2002).  She began her career in Belgrade, Serbia (1997-1999).