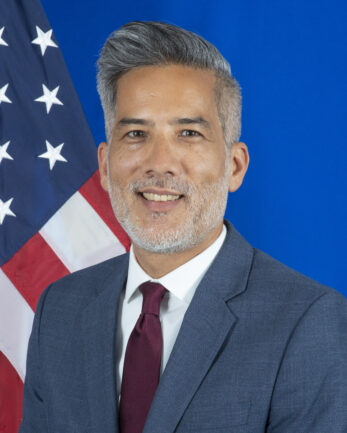 Nicholas Namba assumed the role of Deputy Chief of Mission to the Slovak Republic in summer 2021.  Mr. Namba joined the Foreign Service in 2003 and most recently served as the Foreign Service Institute’s Director of Area Studies where he managed a diverse 35-person team to conduct professional development training for diplomats, members of the U.S. Armed Forces, and intelligence community staff.

While on sabbatical from the State Department 2014-2017, Mr. Namba served as Vice President of Global Business Development for the Smithsonian Institution, where he led a team to develop an international communications and marketing strategy.  He held the position of Deputy Coordinator for Content Development and Partnerships in the Bureau of International Information Programs (now GPA) from 2011 to 2014.  In his capacity as Deputy Coordinator, Mr. Namba led the Department’s public diplomacy efforts to design, develop, and curate content and information for policy initiatives and strategic communications programs.

Mr. Namba has served in a variety of other capacities, including Special Assistant to the Under Secretary for Public Affairs and Public Diplomacy; Human Rights Officer in Moscow, Russia; Chief of the Economic and Commercial Services in Addis Ababa, Ethiopia; and Director of Educational and Cultural Exchanges in New Delhi, India.

Prior to joining the Foreign Service, Mr. Namba was a senior consultant at CGI, a global business consulting services firm.  He also worked for the International Monetary Fund (IMF) and Center for Strategic and International Studies (CSIS).

Mr. Namba has a B.A. in International Affairs from the George Washington University.  He speaks Slovak, Russian, and Spanish, and has studied Japanese.