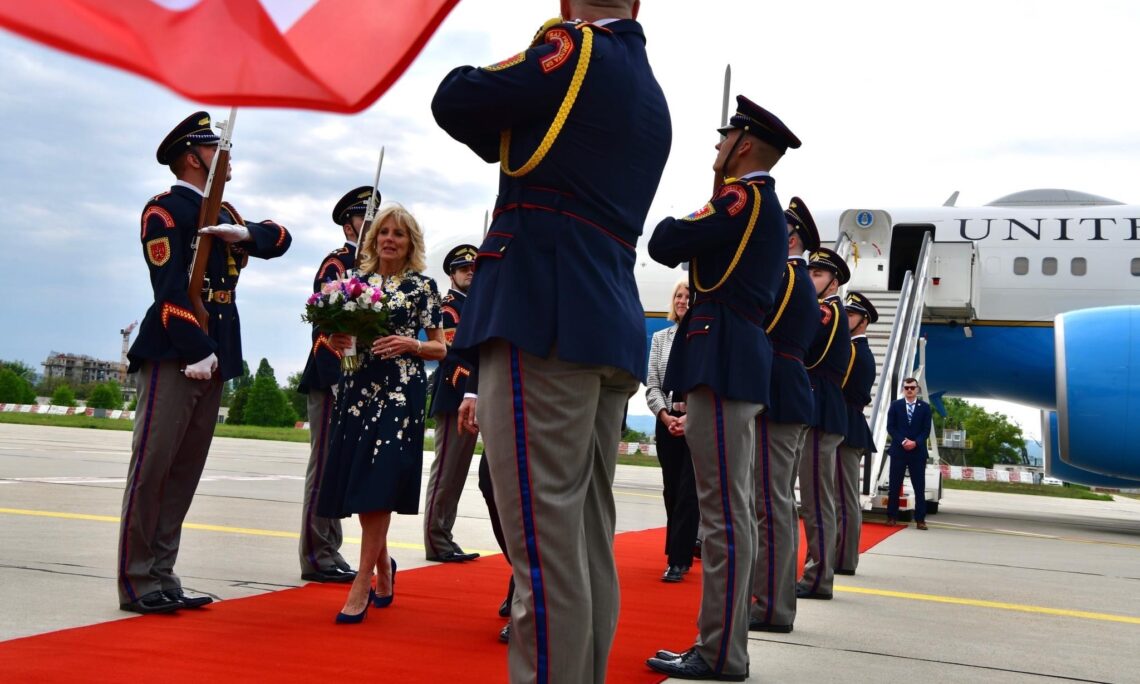 “I am so grateful to all people from Slovakia, for  opening their arms, their homes but most of all for opening up their hearts. The United States of America stands with you. Thank you.”

These are the words of the First Lady of the United States Dr. Jill Biden that resonated through local and social media networks in Slovakia on the second day of her three-day visit to the country.  As part of her trip, she visited a Slovak school hosting Ukrainian students, met with Slovak and Ukrainian mothers and children on Mother’s Day, and visited the border at Vyšné Nemecké to get a better sense of what Ukrainian refugees faced as they fled their homes and Russian aggression in Ukraine.

From the moment she landed at the Bratislava Airport, where she was welcomed by Foreign Minister Ivan Korčok on Saturday, May 7, Slovaks followed her travel across the country through news updates and press. In a meaningful first stop, the First Lady laid flowers at the memorial to murdered journalist Jan Kuciak in a tribute to his memory and the importance of media freedom and combatting corruption.  She then met U.S. Embassy Bratislava employees and their families to thank them for their service and work on her visit to Slovakia.

The next day, May 8, she flew to Kosice for a program that focused on the human toll of Russia’s war in Ukraine. She was met at the airport in eastern Slovakia, and welcomed to the region by mayor of Košice, Mr. Jaroslav Polacek, together with the chairman of the local government, Mr. Rastislav Trnka. At the Vyšné Nemecké boder crossing,  she met with representatives of the Slovak government – Prime Minister Eduard Heger and Minister of Interior Roman Mikulec – and thanked the police, fire and rescue services of the Slovak Republic, representatives of non-profit organizations (such as Mareena), the Youth Red Cross, Maltese Aid, UNHCR, IOM, Slovak Catholic Charity, and with Ukrainian refuges.  In the words of a Ukrainian mother there, “My life has split in two. Life before February 24 and life after. I talk to the kids about it, but how do I explain to them what is going on at home? And, that my husband stayed there?” These are the fears and experiences shared by Ukrainian refugees with Dr. Biden throughout her day in eastern Slovakia.

In a surprise visit to Ukraine, Dr. Biden then crossed the border and headed to the city of Uzhhorod. There she met Ukrainian First Lady Olena Zelenska. She presented her with a bouquet of flowers and the two first ladies shared a hug.  In comments to the press, Dr. Biden congratulated Ms. Zelenska on Mother’s Day. “My heart is with you, Olena, and all of the brave women of Ukraine.” After that emotional meeting, Dr. Biden returned to Bratislava.

On her final day in the country, Dr. Biden met with President Zuzana Čaputová, to thank her for her leadership and continued support for the Ukrainian people.

During her busy three-day visit to Slovakia, Dr. Biden confirmed the strong bond between Slovakia and the United States, our commitment to shared values, and that the United States stands firmly with Slovakia as we all stand united with Ukraine.