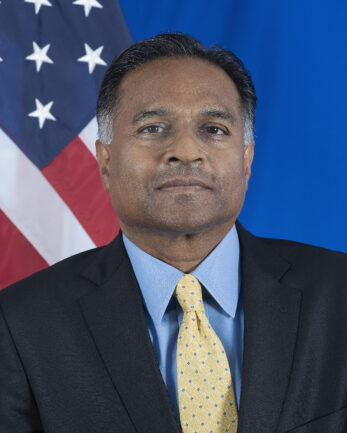 Gautam Rana is the Ambassador of the United States of America to the Slovak Republic.  He arrived in Slovakia on September 14, 2022.  A career member of the Senior Foreign Service, Ambassador Rana previously served as the Deputy Chief of Mission and long-term Chargé d’Affaires ad interim at the Embassies of the United States in Algeria and Slovenia.  He also served as a Director for Afghanistan and Pakistan at the National Security Council (NSC) from 2014-2015.  Prior to the NSC, he was the Deputy Minister Counselor for Political Affairs at the American Embassy in New Delhi, India.  From 2009-2010, Ambassador Rana worked for Deputy Secretary of State James Steinberg as Special Assistant for South and Central Asia, the Middle East, and counterterrorism.  Prior to joining the Deputy Secretary’s staff, he was the Special Assistant to Assistant Secretary for European and Eurasian Affairs Daniel Fried.  His overseas diplomatic postings also include Khost, Afghanistan; Peshawar, Pakistan; and Abu Dhabi, United Arab Emirates.

Prior to joining the Foreign Service in 2002, Ambassador Rana was a staff attorney with the Legal Aid Society in New York City, and a civil rights fellow with the National Asian Pacific American Legal Consortium.  He speaks Hindi, Gujarati, and Spanish, and has studied French, Slovenian, Arabic, and Pashto.  He is currently learning Slovak.  Ambassador Rana has degrees in Economics and International Relations from the University of Pennsylvania, a law degree from Vanderbilt University, and a Master of Arts in Strategic Security Studies from the National Defense University.  He is married, with two children.