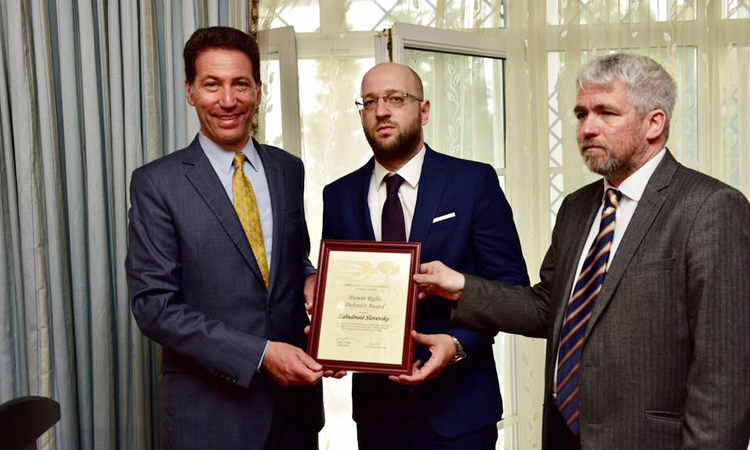 Forgotten Slovakia received the Human Rights Defender Award in recognition of their committed outreach to residents across the country. Their work provides an opportunity for local residents to share their views, while also raising public awareness about the dangers posed by extremism.

The Zilina-based NGO Against Corruption received the Transparency Award in recognition of their persistence in promoting transparency and the rule of law. The organization has provided constructive oversight of regional institutions to limit the space for unlawful conduct and wasteful spending. They also organize public debates and school talks to raise awareness of the impact of corruption, and have hosted an anti-corruption festival since 2014.

Fenestra received the Embassy’s Women of Courage Award, in recognition of their 20 years of efforts to prevent gender-based violence in Slovakia. Founded in 1998, Fenestra was Slovakia’s first NGO dedicated to assisting domestic violence victims. Over the years, its services have evolved from self-help groups to professional support groups supervised by psychologists, legal support, and a hotline for victims. Fenestra’s activists have established strong working contacts with Slovak police and have successfully intervened in numerous cases to protect victims.

EduRoma Director Vlado Rafael received the Human Rights Defender Award in recognition of his commitment to providing equal education opportunities for all Slovak citizens, including young Roma, who continue to face discrimination and segregation in Slovak schools. Vlado and his organization have developed a productive working relationship with the Slovak State School Inspection Service and the Ministry of Education, and implemented a pilot program of joint school inspections. Vlado also has long been involved in other efforts to promote equal access to education and fight segregation in Slovakia.

Veronika Remišová received the Anti-Corruption Award in recognition of her dedication to good governance and government transparency. As a blogger for the daily SME, Veronika published a series of detailed analyses which were particularly effective at highlighting the economic costs of corruption, which are ultimately paid by ordinary Slovak citizens.

Zuzana Števulová was recognized as the first Slovak recipient of the International Women of Courage Award, which she received from Secretary of State John Kerry in Washington in March. Zuzana and her colleagues at the Human Rights League have been tenacious in their efforts to promote the rights of refugees and migrants in Slovakia and the broader region. Since the start of Europe’s migration crisis, Zuzana has been an unwavering voice for greater assistance to and compassion for refugees. She has not shied away from pushing back against anti-refugee and anti-Muslim rhetoric and has regularly challenged social prejudices by introducing Slovak citizens to refugees who have successfully integrated into Slovak society. In his remarks at the Women of Courage Award Ceremony in Washington, Secretary Kerry observed how Zuzana’s example “reminds all of us that the true test of justice is its fairness to those who have the least.”

The Human Rights Defender Award went to Iniciativa Inakost and associated LGBT organizations in recognition of their outstanding and persistent efforts in advocating for the rights of LGBT persons in Slovakia, despite intense resistance, particularly during the preparation of Slovakia’s National Human Rights Strategy.

The Woman of Courage Award went to Lydia Suchova, Director of the NGO “Equity,” for her profound personal dedication to courageously fighting for the rights of men, women, and children from marginalized Romani communities despite deeply seated prejudices against them.

The inaugural Ambassador’s Anti-corruption Award went to a brave pair of whistleblowers from the Piestany hospital, Alan Suchanek and Magdalena Kovacovicova, in recognition of their persistent efforts, despite institutional pressures, to advocate for patients’ rights and the proper use of public funds in the health care sector, particularly in the procurement of a CT scanner at the Piestany hospital.

Ombudswoman Jana Dubovcova received the Human Rights Defender Award for her efforts to keep the Government and Parliament aware of human rights abuses throughout the country. Ombudswoman Dubovcova’s activities send a clear message that everyone has basic rights and that, since anyone’s rights can be abused, everyone’s rights must and will be defended.  Ombudswoman Dubovcova has taken brave steps to systematically protect the rights of all Slovak residents, including those who are most vulnerable, and often ignored.

Olga Pietruchova received the Woman of Courage Award for her work protecting and promoting the rights of all people, regardless of gender, gender identity, or sexual orientation.

The Human Rights League received the Human Rights Defender Award for their advocacy for migrants’ rights in Slovakia. The dedicated individuals at the Human Rights League provide legal assistance to migrants, including those held in administrative detention, offer support to individual foreigners to help them navigate Slovak institutions and adapt to Slovak society. The League also continues to act as a watchdog when new rules appear to threaten migrants’ rights by complicating the provision of legal services for groups of migrants.