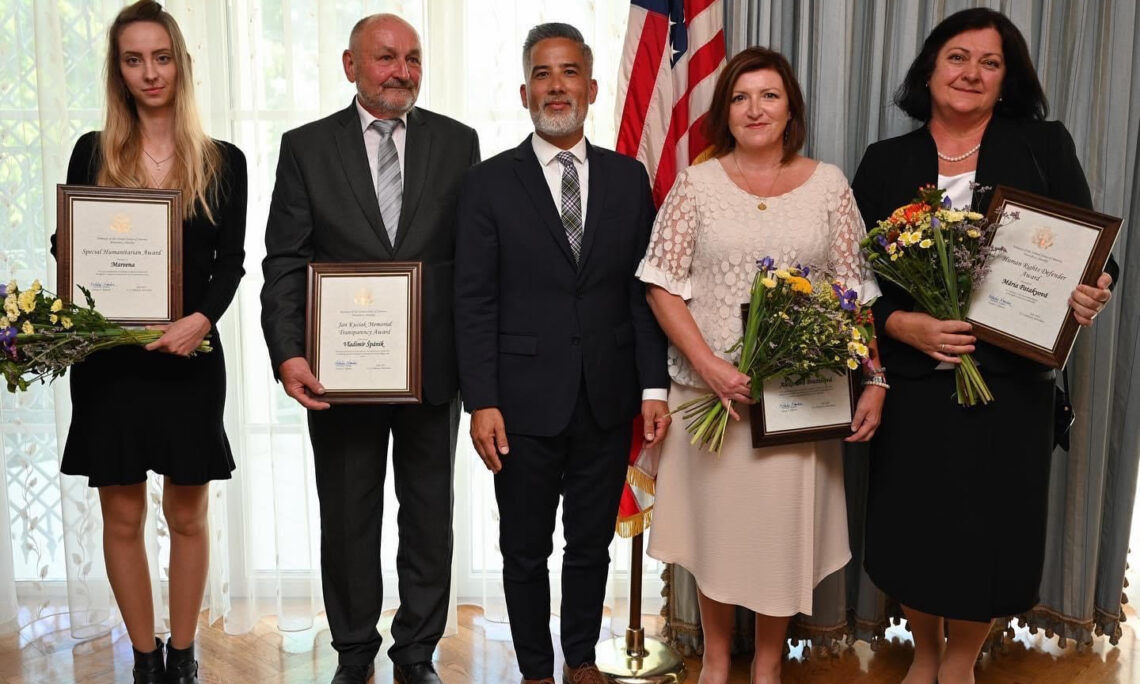 The Chargé d’Affaires of the U.S. Embassy in Slovakia, Nicholas Namba, presented the annual U.S.Embassy Human Rights Awards for 2021. Respect for human rights around the world is an enduringpriority of the U.S. government. The work of human rights defenders in Slovakia directly impacts the lives of many people, and the Embassy recognizes their continued efforts to help people in need.

„The 10th Annual Human Rights Awards ceremony is an important opportunity for us to appreciate and recognize all of you for your work to promote and advance the values that unite us – including human rights, tolerance, good governance, and transparency. We are living in historic times. Time and time again, we have been reminded of the fundamental importance of human rights and are inspired by incredible acts of courage and humanity of those who stand up in their defense in challenging times like these.” said Chargé d ́Affaires Nicholas Namba during the ceremony.

The Woman of Courage Award went to Professor Alexandra Bražinová for her tireless efforts in the face of public criticism to save lives and for her personal dedication to the public wellbeing during the most urgent health crisis of our lifetime.

Professor Mária Patakyová was awarded the Human Rights Defender Award for her relentless and unwavering defense of the rights of the most vulnerable.

The Transparency Award, given by the U.S. Embassy in memory of Ján Kuciak, is an award dedicated to those who have made the most significant contribution to exposing the truth and holding public officials accountable. This year, the Embassy presented the Jan Kuciak Memorial Transparency Award to Vladimír Špánik for his perseverance in the fight for transparency and dedication in building an anti-corruption community in Slovak villages and towns.

During the tenth ceremony, Chargé d’Affaires Nicholas Namba also presented one Special Humanitarian Award in special recognition of unique humanitarian efforts in connection with the evacuations from Afghanistan last summer to the NGO Mareena. Mareena received the award for its commitment to building a tolerant society and for its efforts to help save lives in the face of a humanitarian crisis.