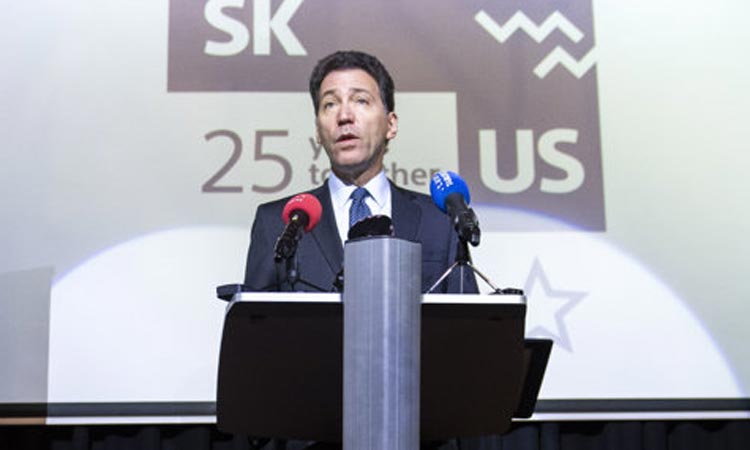 In 1776, the founders of my country had the courage to declare their independence and commit to a national project grounded in democratic governance and liberty for all citizens. Over a century later, communities of Slovak and Czech immigrants in the United States had the courage to seek for their compatriots in Europe the blessings of freedom that they had come to know in their adopted homeland. After securing the support of U.S. President Woodrow Wilson, their efforts led to the signing of Czechoslovakia’s “birth certificate” with the Pittsburgh Agreement of 1918. Inspired by the courage and values of America’s founding fathers, Slovak and Czech patriots such as M.R. Stefanik and T.G. Masaryk patterned the constitution of Central Europe’s first democracy after the United States’ constitution.

During World War II, Slovak patriots showed the courage to stand up against fascism and hatred in the Slovak National Uprising. Courageous Americans, many of whom lost their lives, lent support on the ground, while American airplanes flew in supplies from above. In 1948, the totalitarian government of the USSR attempted to extinguish freedom across Central and Eastern Europe. As a result, the United States was forced to close our Consulate in Bratislava in 1950. Our government, however, refused to sell its building on Hviezdoslavovo Namestie, leaving it empty as a prominent symbol of hope for a brighter future for Slovaks. The building remained under forced closure in 1968 as courageous Slovaks faced a Soviet-directed invasion aimed at crushing their dreams of freedom.

Slovak courage was on display again in 1989, and this time Slovaks won their freedom. And in 1993, the Slovak people peacefully took steps to chart their own future as a democratic, independent state. The United States again stood with our Slovak friends, extending over one hundred million dollars in development aid and sending hundreds of Peace Corps volunteers to help share knowledge and build infrastructure.

Today, the United States and Slovakia have both committed to defend each other and our NATO Allies, as we share the courage to fight for values that bind us together as part of the Western, Trans-Atlantic community of nations.

I feel fortunate to serve as the Ambassador of the United States to Slovakia in 2018, a year that marks the centennial of the founding of democratic Czechoslovakia and twenty-five years of Slovak independence. Our shared history and courage, grounded in common values, span over one hundred years. Sustaining the courage to live by these common values, together with continued strengthening of the political, defense, economic, and personal ties that bind our nations, will allow our peoples to enjoy the fruits of our partnership for another century and beyond.