Home Domov | News & Events | B. Brink: It is clear we have friends and allies in Trenčín 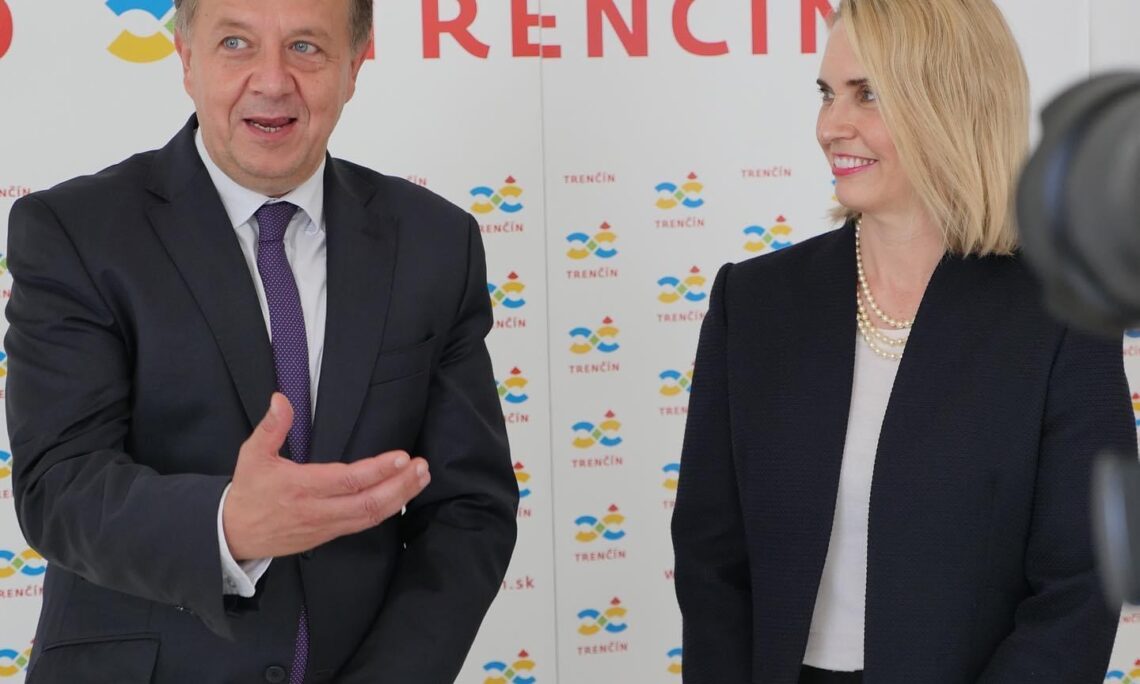 TRENČÍN, July 19 – Meeting with the Mayor of Trenčín Richard Rybníček, a visit to Virtual Reality Media, a meeting with the Jewish community or a welcome of cyclists from California at the 58th International Cycling Days in Trenčianske Teplice was part of the two-day program of US Ambassador to Slovakia Bridget A. Brink during her visit to Trenčín and its surroundings. It was her first official visit to Trenčín, and at the same time her first regional trip after the release of anti-pandemic measures.

“I was delighted to visit the cities of Trenčín and Trenčianske Teplice over the weekend. Cooperation with our friends and partners across Slovakia is good for all of us. It was a pleasure to meet Mayor Richard Rybníček and his Deputy, Patrik Žák, to discuss the competition to become the European Capital of Culture as well as the Mayor’s ambitious urban development plan.  During the trip, I was impressed by the innovation and technology at Virtual Reality Media, a Slovak company that also has a subsidiary in Orlando, Florida, and was honored to meet hockey legend Marian Hossa.  We discussed the importance of sports and promoting a healthy lifestyle with youth in the region. It was a thrill to welcome the young American cycling team and watch them ride in the International Cycling Race in Trencianske Teplice.  After 16 months of restrictions on gatherings, it was a treat to enjoy some live music with Colorful People’s terrific music during the free Friday evening concert at the renovated Atrium pod mestskou vezou in Trencin.  The highlight of my visit was meeting Holocaust survivors at the synagogue in Trencin. Their stories and experiences were deeply moving and I believe that after its reconstruction, the synagogue will become a vibrant center of culture in the heart of Trencin,” said Ambassador Bridget A. Brink after the visit to the region.

During an interview with Mayor Rybníček, Ambassador Brink was interested in the impact of the pandemic on the city and how they are preparing for a possible third wave. She praised the city’s progress in transparency and wished the city much success in its candidacy for the European Capital of Culture in 2026. The Ambassador attended a tour at Virtual Reality Media, a successful Slovak company that focuses on design, development, and production of state-of-the-art military and civilian flight simulators and training systems, including virtual reality technology. During her visit to the Trenčín Synagogue, Bridget A. Brink also learned more about the past of the local Jewish community, the planned reconstruction of the synagogue, as well as the community’s plans for the future. Together with community representatives, including Holocaust survivors, they agreed that we must all stand up to anti-Semitism and hate speech at all times.

During her trip, Ambassador Bridget A. Brink also visited Trenčianske Teplice, where the 58th International Cycling Days took place. The ambassador met with competitors from the LUX USA Ventura California team. It is the first American team to take part in these races. During the race, Ambassador Brink also meet with the chairman of the Trenčín Region, Jaroslav Baška, and the mayor of Trenčianske Teplice, Zuzana Frajková Ďurmeková.