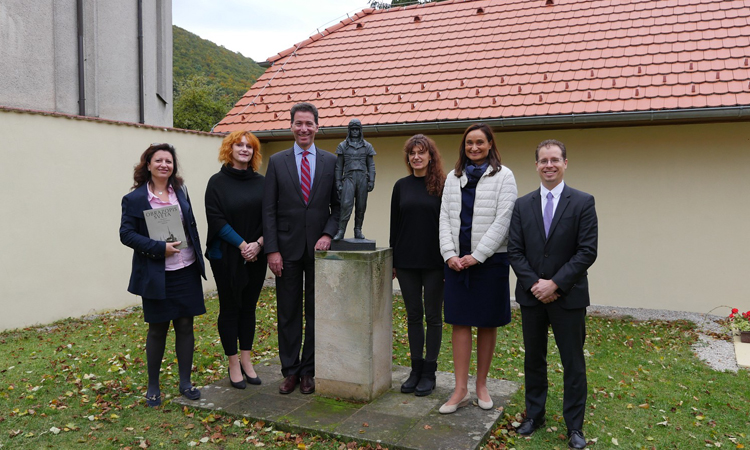 Ambassador Sterling visited Trnava, Slovakia’s 7th largest city (pop. 68,000), on October 12 to meet with the Mayor following his recent IVLP and to re-connect with our closer partners at Trnava University’s Faculty of Law. Trvana’s Mayor, Peter Brocka, returned to Slovakia on October 8 following a three-week IVLP in the U.S. on State and Local Government. He spoke about San Diego’s open data initiative and his desire to replicate some of those efforts in Trnava. The Ambassador also attended the University of Trnava’s 25th anniversary celebration, then met with the dean and faculty of its Law Department, which has partnered with the Embassy on judicial ethics and asylum law projects over the past several years. In the city’s old town, Ambassador Sterling visited a future innovation incubator that will provide space for Trnava’s aspiring entrepreneurs to develop and then market new products, all under one roof. Lastly, the Ambassador visited the MR Stefanik Museum in Kosariska to learn more about the Slovak national hero who played a direct role in the creation of an independent Czechoslovakia in 1918 through his engagement with President Woodrow Wilson and Slovak expatriate communities in Pittsburgh and Cleveland. This visit began to set the stage for next year’s anniversaries – the centennial of Czechoslovakia and the 25th anniversary of Slovakia – which will provide critical opportunities for the Embassy to deliver messages on the enduring nature of our bilateral relationship and the importance of Slovakia’s inclusion in the West.