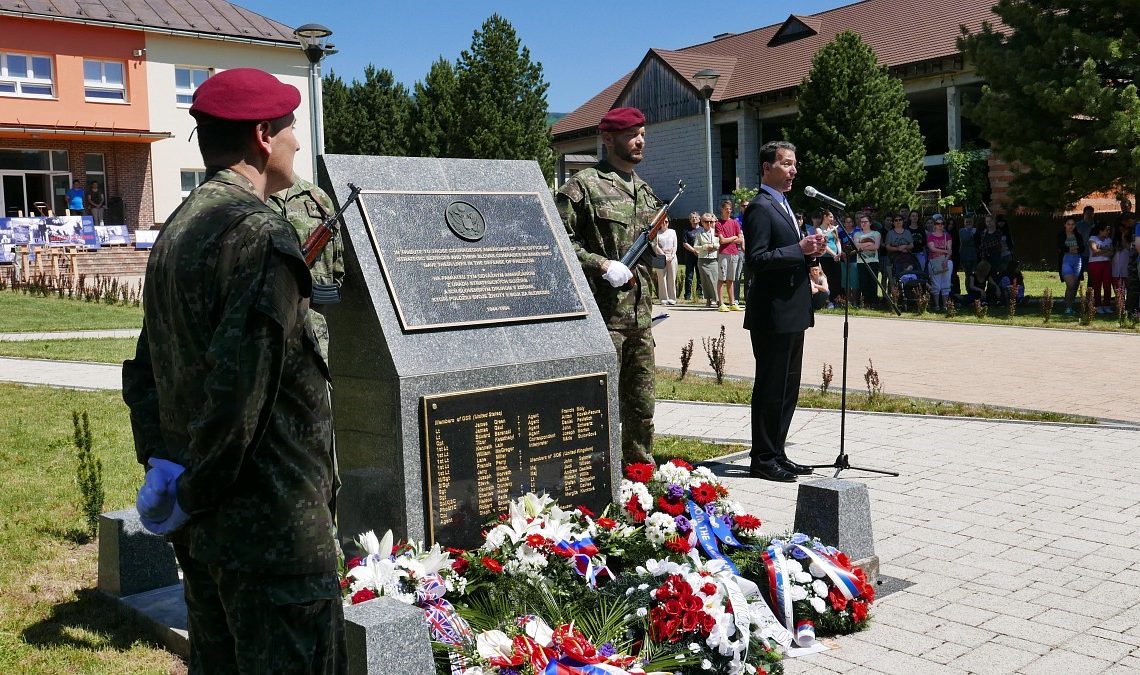 On Thursday June 1st, the U.S. and British Embassies along with the Slovak Defense Ministry held a wreath laying ceremony in the village of Polomka and unveiled a new plaque to recognize American and British personnel who were killed during the Slovak National Uprising. The ceremony paid tribute to those who fought and died to free Europe from Nazi oppression during World War II and celebrate the strong partnership between the United States, Slovakia, and Britain that dates back to the Slovak National Uprising in 1944.

In the fall of 1944, agents of the U.S. Office of Strategic Services and the British Special Operations Executive deployed to Slovakia in order to rescue downed air crews and deliver weapons, ammunition, and demolition equipment to resistance fighters in the region. The operation did not go according to plan and they were ultimately forced to flee. Those who found shelter in a small cabin were captured and sent to Mauthausen concentration camp where they were tortured and executed. Those who made it out credit their survival to the help provided by the local men and women who risked their own lives to offer assistance.

In his remarks, Ambassador Sterling stressed that, “the United States, Slovakia, and the United Kingdom continue to work together to build our collective capacity to stand united against common security challenges.” The military cooperation that began during the Slovak National Uprising remains strong today. For example, NATO brings together Slovak, American, and British service members every year for training and operational missions throughout the world.

Following the wreath laying ceremony, Ambassador Sterling presented a joint service commendation medal to a member of the Slovak Special Forces Fifth Regiment who embodies the strong relationship between the United States and Slovakia. The medal was awarded in recognition of his selfless actions during a complex insurgent attack on a military camp in Afghanistan, which directly resulted in protecting hundreds of Allied lives.