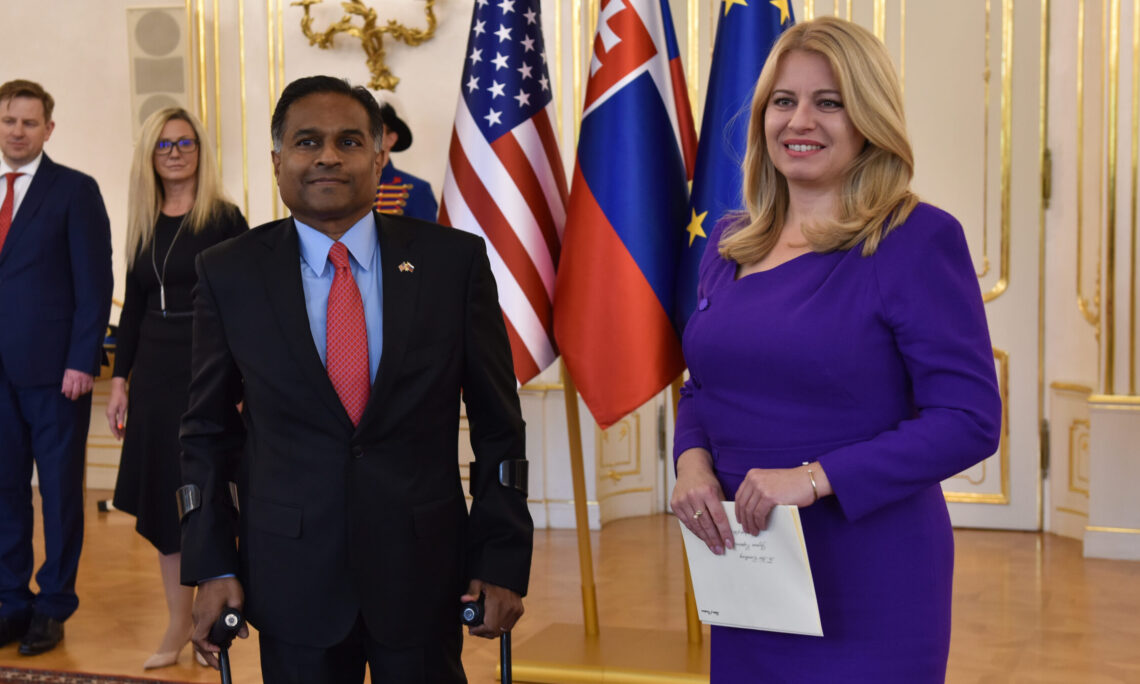 Ambassador Gautam A. Rana presented his credentials to President Zuzana Čaputová today, September 28, 2022, beginning his tenure as U.S. Ambassador Extraordinary and Plenipotentiary to Slovakia. After the official ceremony, Ambassador Rana laid a wreath at the Gate of Freedom monument in Bratislava’s Devín district. Gautam A. Rana is a career diplomat, serving in the Foreign Service since 2002.

“I have had the privilege of working in the White House for President Barack Obama, served in the executive office of Secretary of State Hillary Clinton, and worked as Chargé d’Affaires in Slovenia and Algeria under President Donald Trump, but the honor of my life is being selected by President Joseph Biden and Secretary of State Antony Blinken to be the U.S. Ambassador to Slovakia. The United States and Slovakia share a close relationship, and my goal is to strengthen that bond,” Ambassador Rana said after officially taking the office.

Ambassador Rana’s first order of business following the ceremony was to lay a wreath at Devin’s Gate of Freedom Memorial in honor of the approximately 400 men and women who died trying to escape the Iron Curtain and those who were forcibly expelled from their homeland.

In the coming months, Ambassador Rana’s priority is to strengthen people-to-people ties through our shared history and values, reinforce the U.S.-Slovak partnership as Allies to confront global challenges, bolster the rule of law, improve economic opportunities, and address the threat to democracy from the pervasive malign influence of foreign adversaries.  He will stand with Slovakia as we all stand with Ukraine, and support efforts that combat Russia’s brutal aggression in Ukraine to ensure Slovakia’s security and prosperity.

Ambassador Rana previously served as Deputy Chief of Mission and long-term Chargé d’Affaires ad interim at the United States Embassies in Algeria and Slovenia.  From 2014-2015, he served as Director for Afghanistan and Pakistan at the National Security Council (NSC).  Prior to his tenure at the NSC, he was Deputy Minister Counselor for Political Affairs at the U.S. Embassy in New Delhi, India.  From 2009-2010, Ambassador Rana worked for Deputy Secretary of State James Steinberg as Special Assistant for South and Central Asia, the Middle East, and Counterterrorism.  Prior to joining the Deputy Secretary’s staff, he was Special Assistant to Assistant Secretary for European and Eurasian Affairs Daniel Fried.  His foreign diplomatic postings include Khost, Afghanistan; Peshawar, Pakistan; and Abu Dhabi, United Arab Emirates.

Prior to joining the Foreign Service in 2002, Ambassador Rana was a lawyer at the Legal Aid Society in New York and a civil rights fellow at the National Asian Pacific American Legal Consortium.  He speaks Hindi, Gujarati and Spanish, and has studied French, Slovenian, Arabic, and Pashto. He is currently learning Slovak.  Ambassador Rana holds degrees in economics and international relations from the University of Pennsylvania, a law degree from Vanderbilt University, and a master’s degree in strategic security studies from the National Defense University.  He is married with two children.