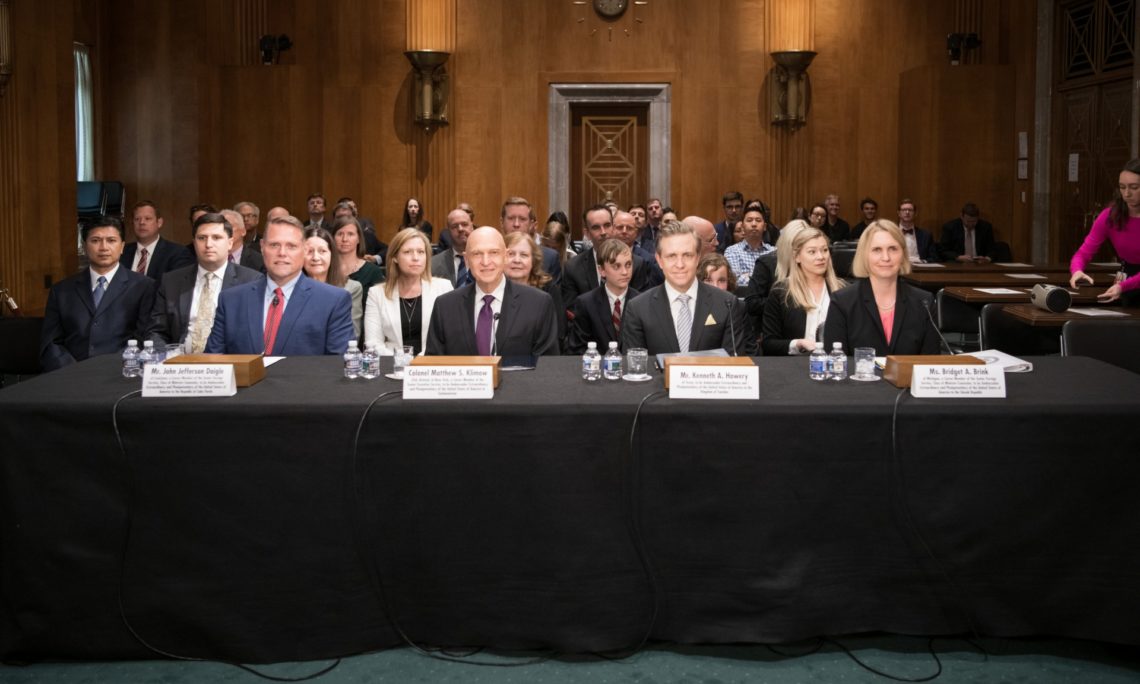 Statement of Bridget A. Brink
Ambassador-Nominee to the Slovak Republic
Senate Foreign Relations Committee
Thursday, May 16, 2019

Mr. Chairman, Ranking Member Shaheen, distinguished members of the Foreign Relations Committee, thank you for the opportunity to appear before you today. I am honored to be President Trump’s nominee for the position of U.S. Ambassador to the Slovak Republic. I am grateful for the trust and confidence the President and Secretary Pompeo have placed in me. If confirmed, I pledge to work with you to advance our nation’s interests in the Slovak Republic.

I first want to introduce and thank my husband Nicholas Higgins for his love and support for over 26 years. A fellow Foreign Service officer, Nick has served in Afghanistan, India, and Georgia, and has traveled from Armenia to be here today. We are so proud of our children, Jack and Cole, who are also here today. As part of a diplomatic family that has moved every few years for their entire lives, I want to thank them for their own service to our country. 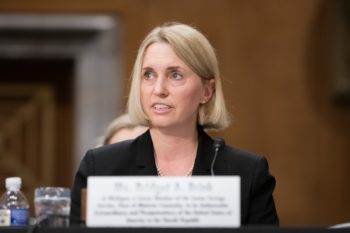 Coming from Michigan, I know these careers have taken us far from those who gave us so much. I want to acknowledge and thank my mother Gwen Brink, father and stepmother, John and Judy Brink, sister Joanna Brink, nephews Andrew and Andre Brink, aunt and uncle Mary and Patrick Sayne as well as my in-laws Adrienne and Kingsley Foster and my brothers and sisters-in-law, all of whom have been bedrocks of support every step of the way. As a new officer serving in Belgrade during the Balkan wars, a political officer supporting historic reform in Georgia, and a policymaker in Washington during Russia’s attempts to redraw the borders of Europe, I have worked closely with our NATO Allies and EU partners to advance U.S. interests in Europe throughout my nearly 23-year career. As a student in London in 1989, I remember clearly that November day when the Berlin Wall fell. Eight days later, the Velvet Revolution began. In the three decades since, the United States has been proud to support Slovakia’s transition to democracy and its NATO accession.

If confirmed, my number one priority would be to ensure the safety and security of my Embassy team as well as any and all U.S. citizens in the Slovak Republic. I would also focus the work of the Embassy on three priorities:
First, I would reinforce our defense partnership with Slovakia. As a member of NATO, Slovakia contributes to NATO missions in Afghanistan, Iraq, and Latvia. Slovakia is also modernizing its military with NATO-interoperable equipment. Last year’s purchase of 14 U.S.- made F-16s was the largest defense procurement in Slovakia’s history and signaled Slovakia’s commitment to strengthening its relationship with the United States. Slovakia plans to meet the NATO Wales Pledge of spending two percent of its GDP on defense ahead of schedule. If confirmed, I will prioritize this cooperation, which shores up security on NATO’s Eastern Flank. I will also encourage increased energy security, a key part of any nation’s national security.
Second, I would promote increased trade and investment opportunities. Since joining the EU in 2004, Slovakia’s economy has become one of the fastest growing in Europe. If confirmed, I will pursue U.S. investment and export promotion efforts to maximize the many commercial opportunities in the Slovak market. I will also prioritize the continued health of Slovakia’s business climate for U.S. investors, and work to improve its transparency and predictability. I will promote opportunities for Slovak firms seeking to invest in the United States.
Third, I would prioritize our shared values. Since the end of the Cold War, Slovakia has anchored itself solidly within the democratic family of nations. I understand that the people of Slovakia care deeply about safeguarding their hard-won freedoms. I am proud of the support that America has offered to Slovakia at critical moments in its history. If confirmed, I would support the strengthening of democratic institutions and rule of law with the knowledge that accountability and transparency are essential to modern democracies and economic prosperity.

With Secretary Pompeo’s visit to Bratislava in February – the first such visit in almost 20 years – and President Trump’s Oval Office meeting with Prime Minister Pellegrini earlier this month, the United States is deepening our partnership with Slovakia. If confirmed, it would be my highest honor to lead our talented team in Slovakia to build on this diplomatic investment and advance our country’s interests there and across the region. Mr. Chairman, Ranking Member Shaheen, and members of the Committee, thank you again for the opportunity to appear before you today. I welcome your questions.