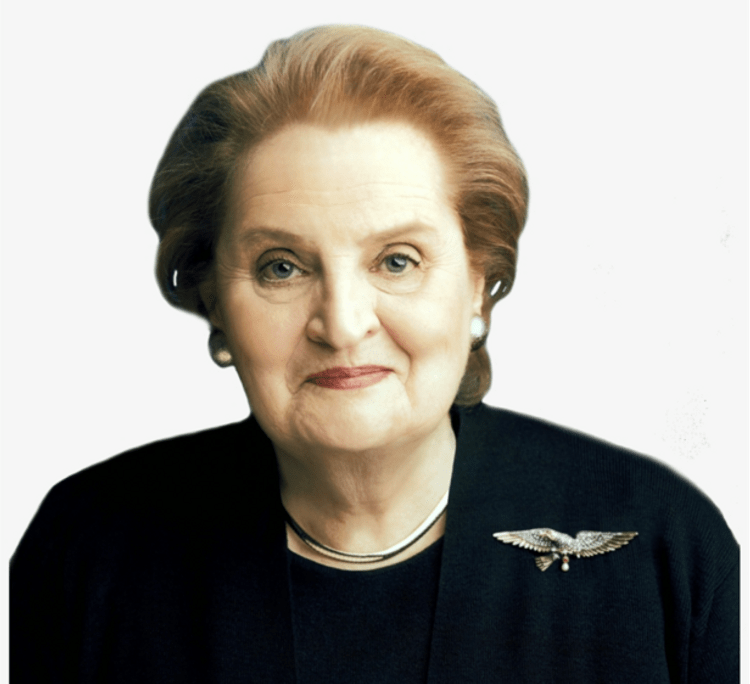 “The reason I made women’s issues central to American foreign policy, was not because I was a feminist, but because we know that societies are more stable if women are politically and economically empowered.” And, “It took me quite a long time to develop a voice, and now that I have it, I am not going to be silent.”

These are the insightful words of top diplomat and Czechoslovak immigrant to the U.S., Madeleine Albright.  Today marks the 25th anniversary of her historic swearing-in as the first female U.S. secretary of state. Standing only 147cm, she is a giant in the field, whether breaking glass ceilings or fighting for democracy around the world.

When asked about her swearing in, she said “It was almost…inconceivable that someone who had not held a government job until she was thirty-nine years old and the mother of three would become the highest-ranking woman [at the time] in American history. Well into adulthood, I was never supposed to be what I became.”

Her strong ties to Slovakia and the region continue today.  Just last year she participated in the opening of the European Youth Democracy Network Headquarters in Bratislava to support the vibrant youth-led democracy building organization in Slovakia, she interviewed with President Caputova about being the first women to serve in their male dominated careers, and she received the Transatlantic Award from GLOBSEC for her support for democratization, freedom building and stability in central Europe. When asked in an interview for Conde Nast travel magazine about her favorite trip, she proudly said the Czech Republic, where she was born.

Madeleine Albright was born into a Jewish family in Prague in 1937.  Her family was forced into exile in the United Kingdom during WWII. After the war, they returned to Czechoslovakia but after the communist takeover in 1948, the family immigrated to Denver, Colorado.  Her achievements include her work in education as a professor, becoming a best-selling author, and holding the office of U.S. Ambassador to the UN before becoming Secretary of State on January 23, 1997.

As Secretary of State, she promoted the expansion of NATO eastward to increase security of former Soviet bloc nations and the non-proliferation of nuclear weapons from the former Soviet republics to rogue nations, favored the ratification of the Kyoto Protocol on Global Climate Change, and supported the expansion of free-market democratization and the creation of civil societies in the developing world.

When visiting Slovakia in 1999, Madeleine Albright said, “Whenever I come to Bratislava, I feel like I’m coming home.” She later added that she has “an unshakable pride in my native land and an unshatterable commitment to my adopted one.”

We salute you, Madame Secretary. You remain a symbol of the American dream for us all and we celebrate your remarkable achievements on this historic anniversary.